Giving The Bride Away

Mrs. Howe on today. Dad went to Lipton with Reverend Corkhill to attend Sandy Goff's wedding and give the bride away.

April 17: A new patient arrived today from Kelvington. Clifford Colby. He drove here in his own truck. The union's annual concert and dance was held in the auditorium tonight with a large attendance. Dick stayed for the dance but I came home. 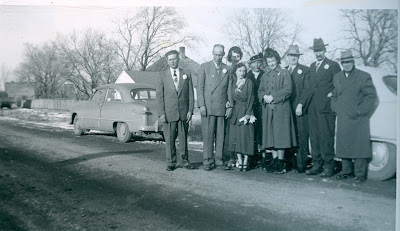 More from the daily journal of Bill Nevard

Nov. 23, 1940: Dick cutting wood. I got another load of wood home. 3 and a half loads total. Dick, Bud, Roy and Joy went to a party at Wheale's tonight. I heard last night that Harry Millward is dead. 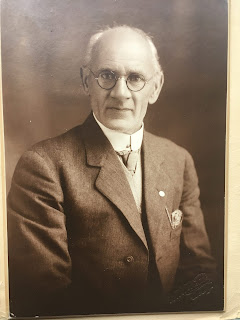 Nov24, Sunday at home. Dick walked to Headlands P.O. after the mail in the evening but Flemings were out so he had to return empty handed.
Nov 25: I went for the mail in the sleigh this morning and saw little Donald Fleming for the first time. It was the first time I had been in Headland's Post Office since the Leslies went away. It was municipal election day but there was no contest in our division. Webster Fleming stood for reeve in the Kellross municipality but was defeated. Dick cutting wood in the bluffs at home.

Dad, Dick and I went to Church service at Headland's School. Mr. Thomas got there late having had car trouble. Both uncles and Joy, Mr. North and Tom, Mr. and Mrs. Radwell and Mrs. Bowman, Mr and Mrs. Wheale, Mary and Shirley, William and Jim Millward, Mr. and Mrs. Murphy Newton, Mrs. Green and baby. Dad and Dick drove on to North's to change hens. I walked home sheltering in John Senft's from a heavy rain storm which made the road all mud and water.

This was Bill's art work done that day. On the back of a Blue Ribbon Tea wrapper. Paper was in short supply in those days. 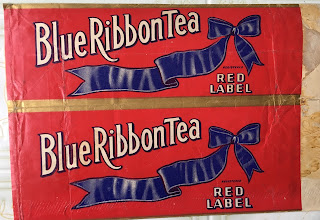 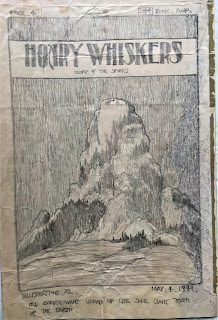 Its interesting to look back on this old video I shot back in August of 1998 viewing the antique cars with Uncle Don and Roy. They enjoyed the old cars. Being a rider it allowed me to shoot more video during the drive back. Plus a tour of the local cemetery showing a couple of family grave stones. Some of which were made by their uncle Ernest Nevard who was a brick layer in Essex, U.K. before he came to Canada. He made a lot of off farm income here doing various brick laying jobs here too.

Its Been A Long Time

Almost a year since any contributions to this Nevardblog. I'd guess this video would make a good addition as it is my uncle Roy Nevard doing his version of a Carl Smith song called Kisses Don't Lie. It was recorded by a friend back in the winter of 1955-56 on a reel to reel tape recorder. Since transferred to cassette and now digitized by me in hopes of preserving it for a few more years. 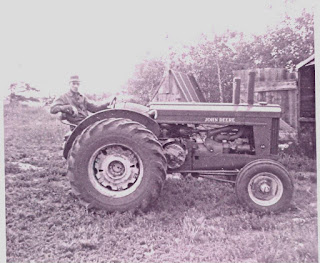 February 23, 1967
At last I have attained my 65th birthday and retirement. Laurence Robillard worked for me so I could have the day free and after dinner I walked up to the San for my party in the assembly room.
It was also a party for Mrs. Regal who is being retired on account of ill health. Her son-in-law and daughter, Brodners from Dysart brought her.
A good representation of the staff turned up to wish us well. Someone said there was over 100 present. Dr. Barnett handed me a purse from the staff with $103 in it and of course we had coffee and cakes.
February 25
My last day of work at the San and I managed to get through it without  collapsing. Dick went to a Church school meeting this afternoon. It was a beautiful moonlight morning when I went to work. 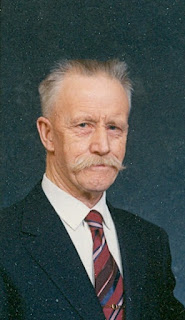 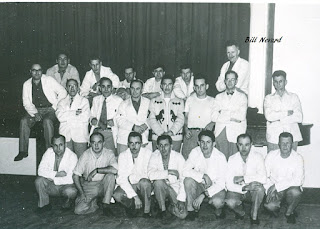 Group photo of some of the Fort San workers including Bill Nevard upper right. Early 1950s.
Posted by Ralph Goff at 5:08 PM 2 comments:

Across The Atlantic in 1944

A letter from Dick Nevard to his brother Bill in August of 1944.
Private Nevard, R. A.
L154284
RCAMC
Canadian Army Overseas
Dear Bill:
Well the unexpected has happened and I'm on the high seas bound for the land of your birth I guess. I think from now on I'll give up trying  to predict the future. That stiff medical at Debert never materialized. I guess that 2 or 3 weeks before you get the letter you and dad will get a telegram to say that I have arrived overseas safely.
I expected to be quarantined on the sheep for a week or two because Lambier broke out with measles yesterday. But we have heard nothing so I guess nothing will be done.
Next day. Lambier's measles turned out to be something else so don't worry. I won't catch measles.
Our beds are 3 tiers high. They are of canvas stretched across an iron frame and I find them comfortable. The berth we are was reserved for corporals but when the corporals arrived they turned out to be privates. So in that manner we got better beds than some of the officers.
We only get two meals a day but they are pretty fair meals. We can buy chocolate bars and oranges quite cheap here on  board ship. Oranges are 7 for 25 cents so we have nothing to kick about. We wear life preservers as a safety measure although there is no danger.
Well I have landed overseas and am quite ok. I had no sea-sickness. I am in a camp but not allowed to say where. We were told that we would get no leaves so there are no prospects of seeing our relations in England for a while. I will write to Aunt Louie and tell her I am in the land of your birth.
The countryside was pretty and I admired everything. We would wave to men standing near the tracks and they would give us the thumbs up.
I got a five dollar bill changed into English money and got a one pound note and a florin and a penny. We have quite a time talking about and figuring out the English money. Lambier I think is good at but I think he got kind of annoyed because the boys kept coming over to him this afternoon when he wanted to sleep and asked him how much was such and such an amount until he got sick of it. Still I don't think it will take long to get used to once one forgets about Canadian money.
I was not going to send a telegram but then they said that letters get there just as fast sometimes so I thought I would write instead. The quickest way is by airgraph but I couldn't get any forms.
I sent my iron home because the current is different over here and so it would not be any use.
I think I'll like it over here because I will feel I am doing my part in a more necessary spot than back in the army in Canada.
The meals are good and they are better prepared than most camps that I have been in Canada. We had mutton and what do you think? We had peanut butter and that is something I have never had in Canada. I hear that we can buy chocolate bars, two at a time for 3 penny which is as cheap as in Canada.
Well everything is alright so don't worry. My letter will not be so long as usual because in the interests of security we must not mention anything about what we are doing. Just our personal life.
I wrote about six letters on the voyage so I am well up with my correspondence. I just have to finish them off and post them.
Cheerio
Your loving brother, Dick 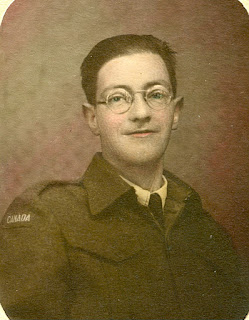 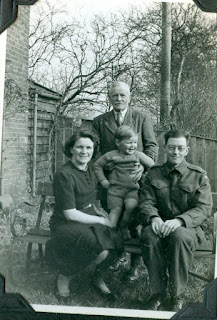 He did get to visit the English relatives eventually.
Posted by Ralph Goff at 4:06 PM 4 comments: