It seem that every time I think I have seen all the old historic documents my family saved, another one turns up. I found this one in an old wooden trunk the other day. It is the certificate of apprenticeship my grandfather had done up when at the age of 16 he signed up for four years carpentry apprentice. I always knew he had been a carpenter before leaving England but this is the first official document I have found. Heavy old parchment paper written in a combination of old english and legalese, it takes some time to decipher but I did finally get it transcribed for easier reading. 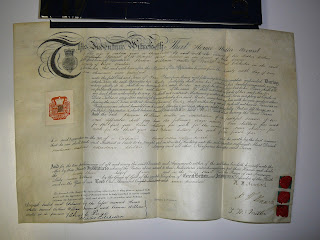 This indenture withseth that Horace Walter Nevard, of the age of sixteen years or thereabouts by and with the consent of his father, Arthur William Nevard, of 36 Straight Road Lexden in the County of Essex, carrier, doth put himself apprentice to Thomas William Miller of Pownell Crescent, Colchester in the said County of Essex, builder.,
To learn his Art and with him after the manner of an Apprentice to serve from the twenty-sixth day of May, one thousand nine hundred unto the full End and Term of Four Years from thence next following to be fully complete and ended. During which term the said apprentice his Master faithfully shall serve his secrets, keep his lawful commands everywhere gladly do.
He shall do no damages to his said Master of the same. He shall not waste the goods of his said Master nor lend them unlawfully to any.
He shall not contract Matrimony within the said Term nor play at Cards or Dice Tables or any other unlawful Games whereby his said Master may have any loss with his own goods or others during the said Term without license of his said Master shall neither buy nor sell.
He shall not haunt Taverns or Playhouses nor absent himself from his said Master's service day or night unlawfully.
But in all things as a faithful Apprentice he shall behave himself towards his said Master and all his during the said Term.
And
His
Finding unto the said Apprentice sufficient Meat, Drink , medicine, medical attandance and clothes, Lodging and all other neccessaries during the said Term.
And
The Amount of the Money or the Value of any other matter or thing given or agreed to be given with the Apprentice by way of premium must be truly inserted in words at length otherwise the Indenture will be void and double such amount or value forfeited.
Signed Sealed and Delivered by the before named Horace Walter Nevard, Arthur William Nevard and Thomas William Miller in the presence of Chas. E. Page, Solicitor, Colchester. for the true performance of all and every the said Covenants and Agreements either of the said parties bindeth himself onto the other by these Presents. The Witnesses whereof the parties above named to these Indentures interchangeably have put their Hands and Seals the twenty-third day of June in the sixty-third Year of the Reign of our Sovereign Lady Queen Victoria by the Grace of God of the united Kingdom of Great Britain and Ireland. Queen Defender of the Faith and in the Year of our Lord one thousand nine hundred. the said Thomas William Miller in consideration of the faithful services of his said Apprentice shall pay him the following, namely: Five shillings per week for the first year. Seven shillings per week for the second year. Nine shillings per week for the third year and Eleven shillings per week for the fourth year. said apprentice in the Art of a carpenter the said Arthur William Nevard whom he useth by the best means that he can shall teach and Instruct or cause to be taught and instructed.
Posted by Ralph Goff at 3:06 PM