CEF, the Canadian Expeditionary Force as the army was known at the time. My grandfather, Horace Nevard was 31  years old when he joined up in April of 1916. He survived some of the big battles of the first world war and was always willing to talk about his army experiences to those who would listen.
He had been in Canada for almost ten years working at establishing a homestead farm on NW24-24-14 since leaving his home town of Lexden, Essex, U.K. Through those ten years he had kept in regular contact with Alice Hall through letters. Maybe it was a letter like this one from Alice that helped inspire him to join the army.


Grove Farm
Saxmundham
Feb. 3, 1916
My Dear Horrie
I was so pleased to receive your nice long letter today as it did seem such a terrible long while since I heard from you. I was afraid you were ill again with shingles or something, so  I was very pleased to hear you were quite well. I expect the mails get delayed as it was more than three weeks from the time you posted it before it got to Saxmundham.
There has been three more Zeppelin raids over England lately. Last Monday night there was six Zeppelins over  and there was 54 peoople killed and 63 injured. I don't think they were very near here but I heard the explosion of a bomb once only it was a long way off. I expect it was at Norwich as they went there. I wonder when this dreadful war will be over.
I think I told you that we had a letter from Herbert before christmas and we have had a postcard from him since Christmas and he was quite well and still in France. I expect you have heard from Emily about your Grandmother's death. She died on Jan. 8th. I have not seen Louie since then as I have not been to Sternfield but Dick told us about it. Thank you for your good wishes for my birthday.Louie sent me three handkerchiefs for my birthday and Mother gave me a nice pair of suede gloves. We have had a lot of windy weather here lately and there has been a big tree blown down up the roadway. I hope you are all quite well and also little Dick. We will soon be a year old won't he? Does he look anything like Ernie, his brother did at that age? I think Mary said he has blue eyes and fair hair.
Now  my dearest Horrie I don't think I have any more news this time so I will close my letter as it is bedtime past nine o'clock. With love to all and my best truest and fondest love to you my dearest Horrie, I remain your everloving Alice. xxxxxxxxx 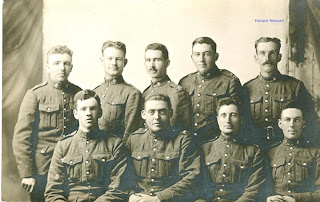